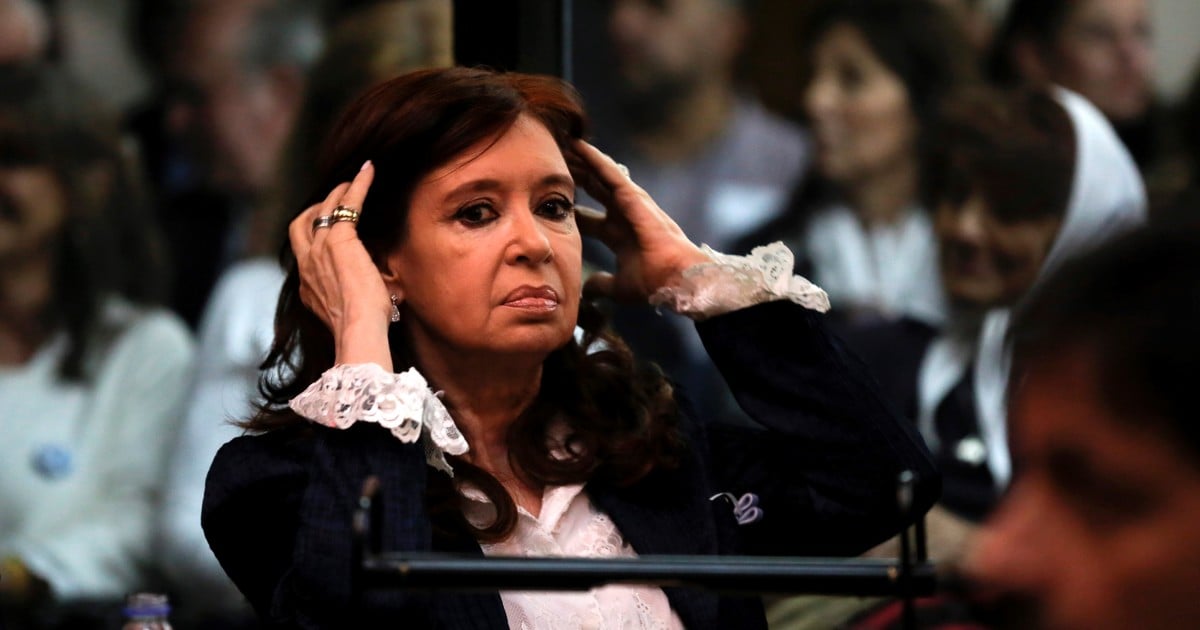 At the end of all accusations at 13.20, Cristina Kirchner learned of what she personally accuses of a case that led her to a bench for the first time in a corruption case. Later on, Lázaro Báez, who managed his hotels until 2013, was the main tenant of Los Sauces. In this case, however, employer K is designated as a recipient of road contracts for a total of 46,000 million pesos, many of which were "plagued by irregularities".

The Senator watched her mobile phone for a few minutes when he looked up at the court, he started reading the charges against him. His leftist advocate, Carlos Beraldi, watched his notes closely. For a moment they looked at something in the phone together. There were a few seconds, while in the background the TOF 2 secretary continued to read the charges.

"Cristina Elisabet Fernández is imputed." involved in illegal association as chieftogether with other officials from various parts of the state, including Néstor Carlos Kirchner, Julio Miguel De Vido, José Francisco López, Carlos Santiago Kirchner, Nelson Guillermo Periotti and at least Lázaro Antonio Báez, operated at least between 8 May 2003 and 9 December 2015, for the purpose of committing undetermined criminal offenses for the purpose of illegal seizure and seizure of public funds basically assigned to work on public roads in Santa Cruz province, including through maneuvers, fraud at the expense of the state and money laundering", was the first thing that was heard.

No approval for any of the proposals Cristina didn't hide her resentment before this example, which soon from social networks again qualified as "political persecution." He kept talking to his lawyer interviews with several comments they used to watch the mobile phone.

Among other things, the Senator is attributed "while he was President of the Nation between 2007 and 2015." to continue the direction, implementation and existence of a matrix of corruption in public road work that has developed since the chairmanship of Néstor Kirchner and one who was involved in the idea and conformation along with what was possible that they will continue to withdraw public funds regularly and constantly through maneuvering fraud into the nation state '.

In his role as head of state, the accusation shows that Cristina has directed and controlled the way this system was developed, using the state bureaucracy in charge of its level. Officials who functionally and hierarchically depend on it will conduct the necessary negotiations to guarantee the success of the prosecution plan for which the national state would be deceived. system of benefits for Lázaro Báez at the expense of state interest and at the expense of the Treasury"

In the next part of the reading of the accusation it was suggested that in order to "direct a huge amount of public funds to the above jurisdiction (Cristina)" used various financial mechanisms at his own expense to provide funding to the National Roads Department so that the funds flow to their partner companies. '

Reading continued until it concluded that the Civic Unit senator, a senator of the Civic Unit, had been involved as a leader of an illegal association that consisted of other public officials and people who acted as private individuals who acted in a stable and lasting position. more than twelve years and their aim was to deduct and receive public funds, including through criminal plans, fraud against the national state and money laundering ".

Cristina listened to the charges without looking at the courtyard. Almost at the end, it was read that his responsibility included "criminal intervention in fraudulent maneuvering into the nation state through work on public roads in which involved in the structure of officials mounted so as to guarantee its success when employed various funding mechanisms so that Baez is the only supplier of public works without debt at the end of his second termthat encouraged and facilitated the irregular performance of officials under his leadership ”.

The aim of everything, according to the accusation, was that "part of this money would go the other way in favor of Néstor Kirchner, Cristina Fernández and their children, Máxima and Florence Kirchner, through various money laundering maneuvers, hotel activities and rental properties" that was investigated in the cases of Hotesur and Los Sauces.