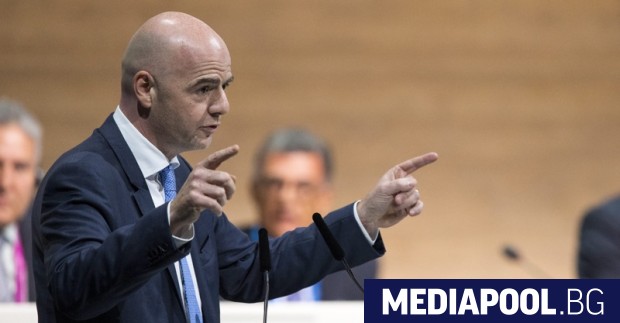 A $ 25 billion scandal is gaining power at the FIFA World Football Federation. The opportunity is a historic deal with Saudi Arabia, after which FIFA will lose key rights in the field of football-related advertising.

On the back of Daveverat, as the German media call, is the president of Gianni Infantino. The pressure to react to it and eventually to resign is on the rise.

Reinhard Grindel, president of the German Football Union, has asked for answers from the head of world football as well as "playing with open cards and putting the facts on the table".

At present, the Bulgarian Football Union has no official position on the FIFA scandal.

"Squeaky" was revealed by the German media

The story begins at the beginning of November after Spiegel revealed Gianni Infant's participation in unclean UEFA contracts when he was Secretary General and Manchester City and PSG clubs violated Financial Fairplay rules.

And if it is an agreement for millions, the new revelation of the Zudojiche Zeitung is billions of dollars and has sparked sharp reactions from German football leaders.

In fact, Infantino is approaching a scandalous agreement with a consortium near the ruling royal family of Saudi Arabia. The talks are about selling the full rights of the World Cup with an agreement of about $ 25 billion.

Squeaky goes through a British investment fund that is a Saudi buyer. According to information in the consortium, SB Investment Advisers Limited (SBIA) and London Centricus Partners LP are associated with Saudi Arabia.

If that happens, FIFA does not really have the most important asset because it will sell rights to all images, marketing, television and satellite TV, as well as rights to the entire Archdiocese and the World Heritage Mondialels.

Global World Advertising revenues from the World Cup are the main source of funding for the football club.

The agreement with the royal family of Saudi Arabia included a mandatory condition for Infantino to lead the company that will be set up to manage this resource and wealth and organize Mondialels, says Zudoyche Zeitung.

So the Swiss, who are almost safe to break out of office because of Spiegel's scandal and other accusations (such as Providing the Qatar House on the World Cup 2022), will leave this post alone and step out of the situation. However, he will take a "cashier" with FIFA.

The President of German football is waiting for answers

Reinhard Grindel, chairman of the German Football Union, immediately responded to the revelation and asked for answers from the FIFA chief.

"New stuff is coming up around FIFA every day, and it can not continue." The president of our organization must face fair and responsible work, expect answers, facts and details, "said Grindel, who is in the leadership of the World Football Club.

He wrote in Twitter that FIFA should not "sell football". In his words, it is now time for the members of the international federation to intervene, for example, the president of the German Football Union Reinhard Grindel.

FIFA: Documents are not up to date

FIFA told the DPA that escape papers are part of hundreds of documents and are no longer up to date.

It is further stated that no conclusions can be drawn for the final decision or the adoption of the proposal.