November 20, 2020 czechrepublic Comments Off on The government will extend the state of emergency and measures some will ease by Monday 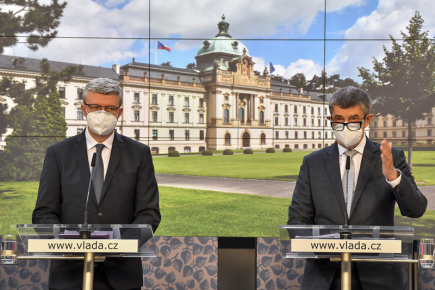 Prague – The government of YES and the CSSD will discuss the extension of the state of emergency and government measures against the covid-19 epidemic at today’s meeting. On Thursday, deputies allowed the cabinet to extend the state of emergency until December 12, otherwise it would end today. Simultaneously with effect from Monday, the government plans to mitigate the measures so that the site corresponds to the fourth level instead of in accordance with the fifth degree of risk of the anti-epidemic system PES.

Until today 23:59, a number of key measures against the epidemic of a new type of coronavirus are in place together with the emergency. These include restrictions on retail sales, the closure of restaurant interiors and a ban on mass events. At the end of the state of emergency, there is also a ban on the free movement of persons in the Czech Republic, including night stays from 21:00 to 04:59, as well as restrictions on gatherings.

The cabinet will probably extend the validity of the current rules until Sunday evening. Monday’s move from the fifth to the fourth stage of the PES system will then mean, for example, that six events instead of two people will be able to participate in mass events. In the case of weddings, funerals and services, the permitted number of participants would increase from 15 to 20. The night curfew should then apply from 23:00 instead of 21:00.

Deputy Prime Minister Karel Havlíček (for YES) told ČTK on Wednesday that he would propose the lifting of the sales ban on Sunday, he also wanted to allow the presence of more customers in the store or a simpler regime for mothers with prams or the disabled. The Ministry of Health also wants to adjust the measures to allow entry into a registered partnership in a state of emergency, similar to marriage. He now demands that he be urgent for some reason.

In addition, the Ministry of Health should adjust its measure regarding the wearing of veils in public, which was annulled by the Prague City Court on Saturday. This was not hampered by the fact that the measure was not sufficiently substantiated. The court criticized that the justification was only taken over by the Ministry from previous measures. The Minister of Health Jan Blatný (for YES) said on Monday that the legal department of the ministry is working on the argumentation and believes that the court will be satisfied.