December 6, 2020 egypt Comments Off on Rocky asteroid samples could reveal much about the secrets of the formation of our solar system 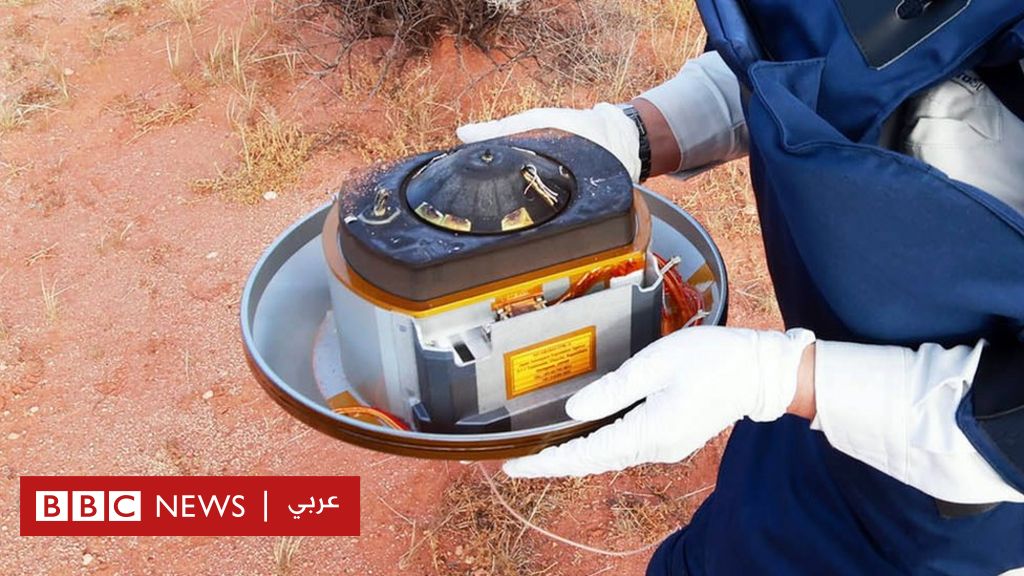 The research team was able to find a space capsule carrying the first important samples of asteroid rocks, which it believes may reveal important secrets of our solar system.

The capsule contains materials from this almost terrestrial body. It is a huge rock formation called “Ryugu”.

The capsule landed by parachute near a remote area of ​​Woomer in South Australia.

These samples were collected by the Japanese spacecraft Hayabusa-2, which spent more than a year on a mission to study this asteroid.

The capsule containing the container containing these samples was separated from Hayabusa-2 and entered the Earth’s atmosphere. The official Twitter page of the Hayabusa-2 mission indicated that the capsules and parachute in which it landed on the ground at 19.47 GMT were found.

“Hayabusa-2 has returned to Earth. We have captured the treasure. Everything was perfect,” mission project manager Yuichi Tsuda told reporters Sunday morning.

He added that the container containing the samples was not damaged on landing.

And earlier on Saturday, cameras caught the capsule landing in the form of a bright fireball that hurried across Copperbed in Australia.

It flowed to the ground at 11 kilometers per second as it fired slower parachutes, then began transmitting radio signals to determine its position.

The spacecraft landed on a wide field in a large area of ​​Woomer under the supervision of the Royal Australian Air Force.

At about 18.07 CET, the research team identified the landing site of the capsule and flew over the area in a helicopter equipped with antennas to pick up radio signals to pick up the container.

The capsule was transported to a rapid initial testing facility before being shipped to Japan, where scientists intend to examine and analyze a sample of gases inside.

The 16 kg container will be transported to a special handling room of the Japanese Aerospace Exploration Agency (JAXA) in Sagamihara for analysis of its contents.

The mission of the spacecraft is to collect more than 100 mg samples from the asteroid Ryugu.

Professor Allan Fitzsimmons of Queen’s University in Belfast said: The sample “reveals a vast amount of information, not only about the history of the solar system, but also about these exceptional things (asteroids).”

Asteroids are remnants of material created during the formation of the solar system. It consists of the same materials that went through the process of forming the Earth, but differs from the fact that it did not merge to form planets.

“Having samples from an asteroid and Yuga would be a really exciting discovery in our scientific field. We believe that Ryugu is made of very old rocks that will give us an idea of ​​how the solar system was created, ”said Professor Sarah Russell, responsible for collecting planetary materials at the Natural History Museum in London. .

Our study of samples collected from Ryugu can give us an idea of ​​how water and other elements necessary for life appeared on Earth at the beginning of its formation.

Comets are thought to carry a lot of water to Earth in the early days of the solar system. Professor Fitzsimons says that the chemical composition of water in comets sometimes differed from the water in our oceans.

However, the composition of the water in some asteroids outside the solar system seems to be more in tune with our water. It is possible that Ryugu originated in a frozen area before moving into its current orbit and near Earth.

Professor Fitzsimmons told the BBC: “Maybe we were looking at comets all the time to see how water reached Earth in the early solar system, and of course we had to look a little closer to our planet; to those primitive asteroids, but in their formation stony. ”

And it’s really something we should look at carefully through those samples from Ryugu. ”

The Hayabusa-2 spacecraft, which flew near Earth and launched a sample capsule, will embark on a new mission to explore a much smaller asteroid up to 30 meters wide and reach it in 2031.

Hanan Turk makes bread in the kitchen with his two daughters “Maryam and Mona” .. Videos and photos