Agreement on equilibrium, reaction and lantern

November 8, 2018 greece, Πολιτική Comments Off on Agreement on equilibrium, reaction and lantern 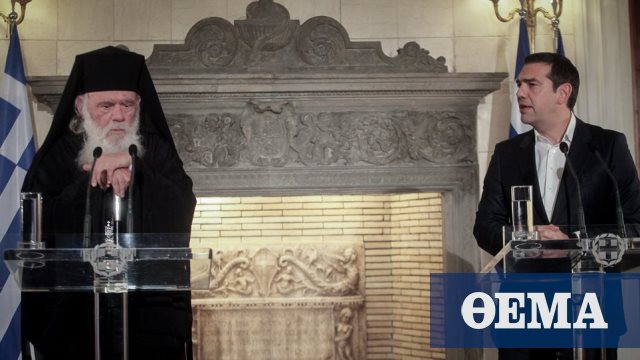 "Another agreement and another intention to agree" was approved yesterday Archbishop Ieronymos under the pressure of the spiritual reactions and discomfort that he revealed Lantern. After the meeting of the Permanent Holy Synod, the Archbishop tried to pacify the priest.

"We have no agreement but the intention to reach an agreement," said Mr. Ieronymos. "We have a message that we have a willingness and a good will to find a solution with the state for the problems that last for a century. We all meet every day before us," and when answering the question of whether there is any reason to fear the pay of the clerics, I hear news from TVs, reports, and say, "But are we in Greece, or are we a jungle?" "

The Archbishop in his statements pointed out his decision ChurchIt will be collective and not in itself, given that perhaps before the end of 2018 there was a final agreement between the church and the state. In particular, an extraordinary hierarchy is convened by the Archbishop before the feast, which will deal with the issue of a joint communiqué between Prime Minister Alexis Tsipras and Archbishop Ieronymos.

H Holy Synod from her side, she explained that "we have not signed any agreement".

In particular, this announcement emphasizes: "After the meeting of the Archbishop of Athens and of all Greece, Mr Ieronymos and the Prime Minister, Mr. Alexis Tsipras and the communiqué published, the Holy Synod announces this:

1) No agreement was sought or signed at the meeting, but the reciprocal "intention of the Church and the State to reach a historic settlement that would take the form of a legislative solution" was expressed.

2) In this case and the relevant proposals, as the competent authority, the hierarchy of the Greek Church should be organized in order to make final decisions.

3) The purpose of the final agreement is, in any case, the common benefit of the people and the Church, with the essential prerequisite of protecting and fully preserving the rights of our clergy.

4) We are pleased that the Greek Prime Minister has today admitted that: a) "the Church's offered and historical role is recognized in the birth and formation of the identity of the Greek state and the people," b) "the aim is to strengthen c)", the state accepted the salary of Cleris in exchange for the ecclesiastical property it acquired "; d)" the destruction of the historical symbols of the cross by Greek flags and our national symbols are fun comic and tactical things "and" the existence of faith in Greece is a fact that can not be forbidden. "

5) On this occasion, we expect the whole political world to benefit from efforts to understand and respect our tradition so that we all work together for the good of the Greek people. 6) We hope that this spirit prevails in the upcoming revision of the Constitution.

The Metropolitan of Kalavrita and Aegialia invites the clergy to excitement and resistance Ambrosein agreement with Ieronymos – Tsipras on the salary of the church in the Church, and launched a new sharp attack on Alexis Tsipras.

"Fire and Grail," Metropolitan Dimitriadis emphasizes that "those who rejoice in this event, or those who think they emptied 10,000 states, think that what happened once can be the other." Many metropolitans, however, like Ioannina, are for a proposal put forward in a common communique on clergy, while other metropolitans ask whether the priests are civil servants or civil servants because they are virtually inactive.

Metropolitan Fthiotidis Nikolaos, who appeared at the "Star of Central Greece" radio station, stressed that this was not a church and state agreement, but a two-man agreement, the president of the hierarchy and the prime minister.

"The Church is not an archbishop, they say the journalists, nor the prime minister is the state. They are the heads and rightly said that they will approve this first debate if they accept it and the hierarchy," he said.

Mr. Nicholas said to the Church's property, "While the Church grants an amount, but I do not believe in the state, in the past, the state grabbed church property or received a gift on behalf of the Church to give politicians, politicians, and politicians." These are the words of the Blessing that told us in the hierarchy " Metropolitan Fthiotis.

"Ecumenical Patriarch Bartholomew, when officially informed, notes the meeting of the holy and holy synod on November 27 to evaluate them," answers the response of the Ecumenical Patriarchate to the joint communiqué of Prime Minister Alexis Tsipras and Archbishop Ieronymos.

But the circles of the Ecumenical Patriarchate said protothema.gr that the patriarchate was not informed and the communique was sudden.

They noted, of course, that the joint communiqué may relate to relations between the Greek Church and the Republic of Poland, and not the Ecumenical Patriarchate, but if they are concerned, they are waiting for information.