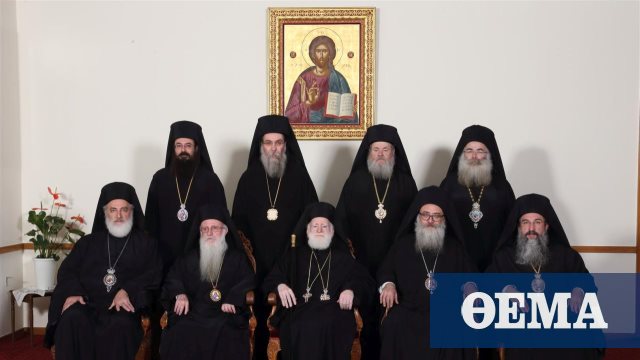 It disagrees vertically with the "religious neutrality" of Greece, the Church of Crete, as stated in the communiqué issued by the Cretan holy synod after … today's marathon.

Hierarchs of the island met today at a meeting and discussed the proposed revision of the articles of the Greek Constitution, Salvation of the Holy Clergy and Church Property.

"In any case, the Christian Church disagrees with the proposed addition of the phrase:" The Greek state is religiously neutral "in the third article of the Constitution," explicitly mentions the Communion of the Holy Synods.

At the same time, the hierarchs of Crete regard the "unacceptable revision of Article 21 as protecting and protecting the sacred family institution," while pointing out that "the proposed revision of Article 3 does not explicitly identify the jurisdictional identity of the Cretan Church, that within the ecumenical patriarchy is a semi- is governed by its own charter. "

Regarding ecclesiastical property, the hierarchs of Crete say that the rumors of ungrateful property "do not correspond to reality," while the church of Crete gave most of its property to both desperate and state "to cover the salary of the Holy clergy."

It should be noted that the Cretan Church belongs to Phanari, and therefore its attitude is interpreted to reflect the prevalence of Athenian proposals in Phanar.

The announcement was made following a visit by Minister of Education Kostas Gavroglou to the Ecumenical Patriarchate. The Ecumenical Patriarch allegedly complained to the Secretary of State about the lack of information from the government and ambiguity regarding the status of metropolises that are spiritually interconnected with Constantinople and not with the Greek Church.

Take a closer look at the Synod Message:

On November 10, 2018, an extraordinary session of the National Synod of the Church of Crete took place in the Heraklion District and dealt with the subjects of today's regularity, namely: a. The proposed revision of the articles of the Greek Constitution, b. The clergy's wages and c.

The third session addressed these main issues and studied various ecclesiastical, social, legal and other extensions and parameters that are aware of the importance of their attitudes and decisions towards nations and history.

With regard to the proposed revision of the articles of the Greek Constitution by the Government, the Annual Assembly unanimously decided and declared:

Considers it unacceptable to revise Article 21, which refers to the original family institution and protects it, which, according to a valid constitution, constitutes the "basis of the preservation and enforcement of the nation" and is under the protection of the State and explicitly declares its objection to its formulation by the Constitution. Both the Archbishops and the Holy Gospel accept the continuous demands and protests of people for the problems that are now facing the institution of the family that is the first cell of our society and even in times when our country has a deep demographic problem. The family needs clear constitutional protection and not deconstruction.
The Fourth Session expressly disagrees in principle with the revision of Article 3 of the Greek Constitution, as this requires any national, social, legal or legal necessity. This is the position also expressed by the Ecumenical Patriarch of the Ecumenical Patriarch. Bartholomew, August 1, 2017 His seventh patriarchal letter to the Prime Minister of Greece.
In any case, the Christian Church disagrees with the proposed addition of the phrase: "The Greek State is religiously neutral," in the third article of the Constitution. It declares its respect for every religion which is now protected by the Constitution (Article 13 (2)) and by the law of the state. The legal implications of the proposed introduction of the term "Greek State is religiously neutral" is unclear. Any experimentation and persistence in this matter will have negative consequences in the future for justice. What does it mean to the people and the Church the reason for the religious neutrality of Greece? How does the state interpret it?

Also, the proposed revision of Article 3 does not explicitly identify the jurisdictional identity of the Cretan Church, ie that it is a united church within the ecumenical patriarchy and that it is governed by its Charter of Fundamental Rights.

Regarding the question of the use of ecclesiastical property, the holy synod unanimously decided and proclaimed the following:

They are heard and told of unfulfilled ownership of the Church, they are not. The Church of Crete has, in time, moved away from most of the property of people who suffer the suffering of the people of the Fund of Fighters, the subsidies of students, and the beneficial ecclesiastical providential structures to support and assist our loved ones throughout Crete. In addition, most of his property was given to the state to cover the salary of the former cleric. Today's existing church property in the Great Great, most of them is worthless and can not cover Crete's wages in Crete. So, what kind of "usual" we have been discussing, which will be able to cover the wages of our clergy?

As regards the salary of the former cleric, the holy synod unanimously decided and declared:

The Church of Christ honors his spirit and acknowledges that they are doing the best in their service. The role of the Cretan government is not only ecclesial but also national and social. Especially in the years of this prolonged crisis, the spiritual Cretan is the one who gives many roles and initiatives that solve the everyday problems and difficulties of our people and preserve social cohesion. In this context, the Synod clearly states that the current statutory salary of a former clergy, which has been tested for decades, does not require any change. They were issued to change the wage regime for clergy, do not guarantee work rights, and leave gaps and ambiguities on many levels. In this way, the future of hundreds of Cretans in Crete, as well as their owners, some of which are many, secular and controversial. The Holy Synod will ensure the clergy and their households in every legal way serving the Cretan Church and will not allow for violent unfavorable changes to their working regime through grave violations of their rights.

To date, many people are silent about the cruel violation of the religious rights of the clergy, because they know they are also able to be in the same position.

The Christian Church declares that any official informal announcement was, as stated above, and expresses dissatisfaction and strong protest with the Greek state.

Representation of the Holy Session, together with representatives of the Holy Office of Crete, expressing nine hundred and more clerics of Crete, who go directly to the leaders of the Greek Parliament's gums to file and support formally the positions of the Church of Crete. MEPs and other members of the Greater Crete will also be asked to ask about the attitude of the Cretan Church on all the above-mentioned questions concerning the history and traditions of the Cretan people.

From the National Council of the Church in Crete