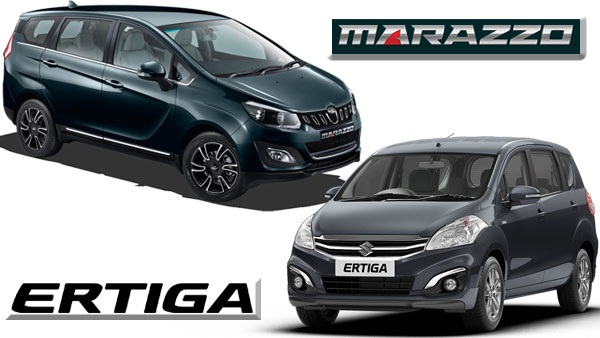 Mahindra Marazzo was launched a few months ago in the Indian market. In the first month, the Mahindra MPV offer managed to attract more than 10,000 bookings.

Mahindra Marazzo was recently updated by Apple CarPlay. Originally came only with Android Auto, but now Marazzo has become the first Mahindra product with Apple CarPlay.

The Marazzo MPV is offered in a configuration of seven and eight seats, with prices starting from Rs 9.99 lakh, ex-showroom (Delhi).

The Marazzo MPV is available with one engine option; A 1.5-liter diesel engine with 121 hp and 300 Nm of peak torque. The engines are equipped with a six-speed manual gearbox as standard.

Mahindra says he is working on the AMT for Marazzo, while the gasoline engine is also part of future MPV plans.

Maruti Suzuki, on the other hand, is ready to introduce her latest iteration of Ertig in India. Prior to launch, Maruti offers heavy discounts on its current generation of Ertiga MPV.

The new Maruti Ertiga model will be based on the HEARTECT platform, similar to the Swift and Dzire models.

The latest generation of Ertiga will be powered by a new K-series petrol engine with a capacity of 1.5 liters with slightly hybrid technology Maruti. The power unit will produce 104 kp and 138 Nm of torque. The Ertiga is also available in a 1.3-liter diesel engine with a power output of 89 hp and 200 Nm of torque.

However, with regard to the hatchback segment, the brand new Hyundai Santro has received a lot of demand from the start time. The new Santro company has earned more than 30,000 bookings in less than 15 days and has gone through some of its competitors such as Tata Tiago. The small hatchback now sits just below the WagonR and Celerio in the list of best-selling cars in October.

Sales of Mahindra Marazzo have recorded a good growth in the past few months. Demand for the Mahindra MPV has also increased due to a number of available features and a competitive price.

Maruti Suzuki recorded a decline in Ertiga sales, mainly due to the arrival of a new generation model. It is expected that the new generation of Maruti Ertig, which was once launched, will offer hard competition in the sale of Mahindra Marazzo.