Drama of the hero, viewers on the runway out of committee control

November 9, 2018 indonesia Comments Off on Drama of the hero, viewers on the runway out of committee control 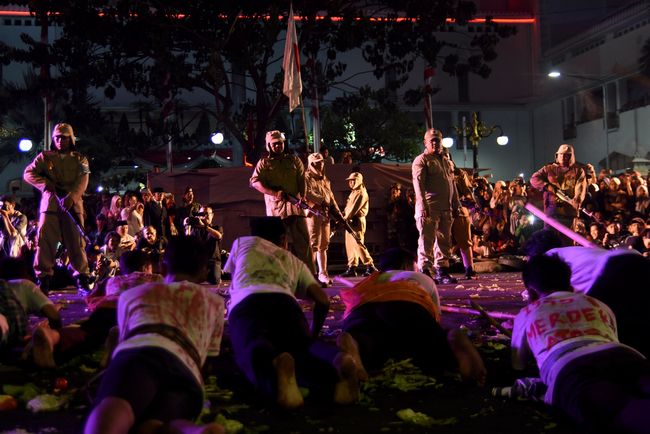 Jakarta, CNN Indonesia – Responsible person and organizer of the Colosal Drama action Surabaya Burns, Taufik Hidayat said he was concerned about the incident that led to three people being killed and dozens more injured.

Several viewers who were in Viaduct or the bridge that traveled around the train around the Surabaya Street Heroes event were out of control.

Taufik said the incident occurred so quickly. He did not expect the train to make the evening viaduct on Friday (9/11). Because, like in previous years, the train never crossed when the track had taken place.

"Two years ago there were no trains that would have passed until the action was completed, but tonight the train passed, I did not know the plan," said Taufik, who is also the chairman of Blazing Surabaya.

According to him, the community was so excited to watch this drama, the number even rose to spread around this place. In fact, only Jalan Pahlawan was prepared.

"The audience reached the Tugu Pahlawan fence, including those in the buildings, on the rails, so it was their enthusiasm until there was a lift and a fall from our control," he said.

"I repeatedly appealed to the speakers before the program started, and even before the train passes, we repeatedly call, friends, please come down," he said.

He also claimed to have co-ordinated with the police to ensure placement when the drama.

"We have coordinated and exist PMK ambulance, there is the police, this program is safe, we try to be proper, but the problem is that if outside the system we can not achieve, especially the location is far from the point, "he said.

But shortly after the incident the organizers showed up to continue the drama, without any pause, the actors stayed as usual. Taufik had some reason to say that the incident would be even worse if the track was canceled.

"In my opinion, these friends (actors) are working, maybe a lot shocked, but it will be more shocked when friends from the regions did not show the podium, even if they practiced for almost a month, "he said.

The drama was then accelerated by the Taufik from what should last for 60 minutes, up to 40 minutes.

"However, I represent the Blazing Surabaya Community expressing deep sadness and all my friends participating in the drama, I am sorry they are participating," he said.

Burning Colosal Drama alone is routinely held in Surabaya since 2011. This drama is a memorial moment every night of Heroes' Day, which falls on November 10th.