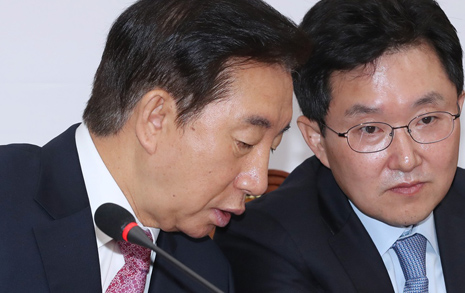 Former Minister of Education Kim Sang-gon issued an official statement on June 16, "My Daughter's Freedom and My Daughter's daughter, Kim said," I have three daughters. "" The first was not assigned to Sookmyung Girls High School. The second and third were assigned to Sookmyung Girls High School, but I did not know the newly appointed Dean. "" The second and third students chose universities and embassies that are not related to a private private university.

Kim said, "When my two daughters went to Sookmyung Girls' High School in 1998 and 2000, the admissions system at that time was very different from the last one." "In the end everything is not true," he said.

He said: "I am deeply sorry that the high-ranking party leader was a public opinion problem without confirming the facts," it is a bad act that encourages distrust in educational policy, destroys the privacy of individuals and families and shakes the foundations of democratic society. "

The South Korean side has been suspicious of the daughter of former Kim Sang, the minister of education – she has won and apologized for more than two hours. It was because of the CIS reputation that the facts were not confirmed and the question was raised on internal countermeasures.

The head of the Ministry of Education, the father of the twins, who was identified as the side of a female sexual manipulation case with Sookmyung, was the head of the daughter of former minister of education, Kim Sang.

In addition, Park Won – soon mayor of Soula, left for Soul National University of Fine Arts and went to college of law. The charge was made by Kang Yong-suk several years ago.

Kim Sung-tae, the chairman of the Korean Party, said at a meeting: "A person who worked as a teacher of Kim Sang-gon, a former education minister, came to our side with the suspicion of being the father of this twin twin.

"Kim's daughter passed through the prestigious dental university of Soul National University, and this department is the place to choose a comprehensive assessment of the student department and the recruitment of regular students." "It's just coincidence or unknown," he said. "Of course, people should be interested in this matter."

The goal of Kim is not to end, but Park Won – soon mayor of Seoul, who says, "I can not comment on the past story." He said: "Park Won – an early child of the mayor, went to Seoul's National University of Fine Arts and became an outstanding student at Soul National University," he said. "It is very unusual to hear about school officials and students," he added. "I hope it's a coincidence," he said, "but at that time the professor of law school in Seoul is now enjoying the regime's power." Here, power regime means the head of civilian affairs of the country.

Kim Sung-tae, who took over Mike, said: "Children of Park Won – Early, who entered the Seoul National University of Fine Arts in 2002, specialized in design and then specialized in law in 2006," Park Won-soon said , I have doubts. He said: "Kang Yong-seok said that the daughter of Won Park – the early Mayor of Seoul had a minimum grade of 3.68, suggesting it is the lowest among successful and past students." Park Han-Soon said.

In 2011, when the first problem arose, a professor of law at the Soul National University in Korea said: "The law school has nothing wrong," he said. "It is an act of tyranny and the spread of false facts for its political purpose, Attack".

Kim Sung-tae, a former president, said: "At that time, you should be proud, fair and just journalists who were professors at the law school of Soul National University." He added: "The fact that my classmate, who was responsible for the education of her daughter, Kim Sang-gon, was the father of the twins of the daughter of a fat father and sister, and started to get into chaos," the journalists said.

Kim Yong-tae "Problems Without Confirmation of Facts … I sincerely apologize"

But when the press release began, the situation changed. The Ministry of Education refuted that it was "unjustified".

He added: "I have received various reports from the CIS suspicions and confirmed that there is such a suspicion about the CIS and caused a public opinion problem." I admit that I have neglected the facts. ".

Chief Executive Officer of Sookmyung Women's High School A was suspected of having previously passed test questions to her twins in the same school. The police filed A and their twins for prosecution and claimed to have obtained evidence that the test strip was actually released. The children asked for a withdrawal, but Sookmyung Girls & High School did not accept it. Instead, he said he would be expelled by zero treatment.

Meanwhile, former Deputy Prime Minister Kim Sang- <오마이뉴스>"Nobody among my three daughters who went to a dentist is in talks with the South Korean government and says," It's absurd. "