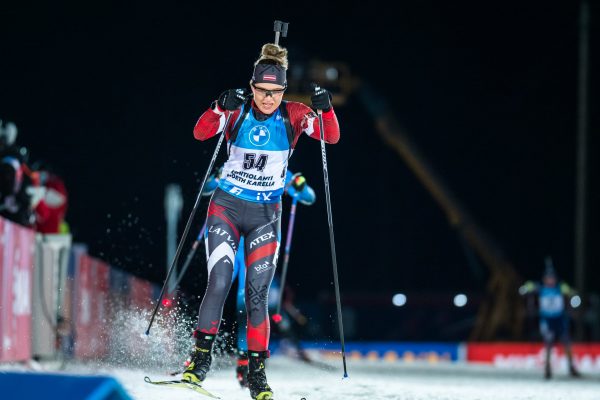 In the distance of. Biathlete Annija Sabule considers her World Cup debut a good impetus for further work.Photo: Petrs Slaviks

The new biathlon season began at the Finnish biathlon center Kontiolahti, and in the first phase, two biathletes made their debut in such a high-level competition – Annija Sabule and Rūdis Balodis, whose sport began at the Cēsis Sports School.

Suddenly, the athletes on our part were regularly represented in the World Cup, in the World Cup, and there was a time when we were all in the men’s relay. Then the queues decreased, in recent years Baiba Bendika represents the Cēsis party in the biathlon world cups. She had high hopes for this season, unfortunately the first stage had to be skipped due to “Covid-19”. It is true that Baiba is not the only virus affected at the beginning of the season, but in order not to leave the ranks of athletes empty, the International Biathlon Federation (IBU) has determined that others should come instead, even if they do not meet qualifying standards for PK competitions. This introduced changes in the Latvian application. 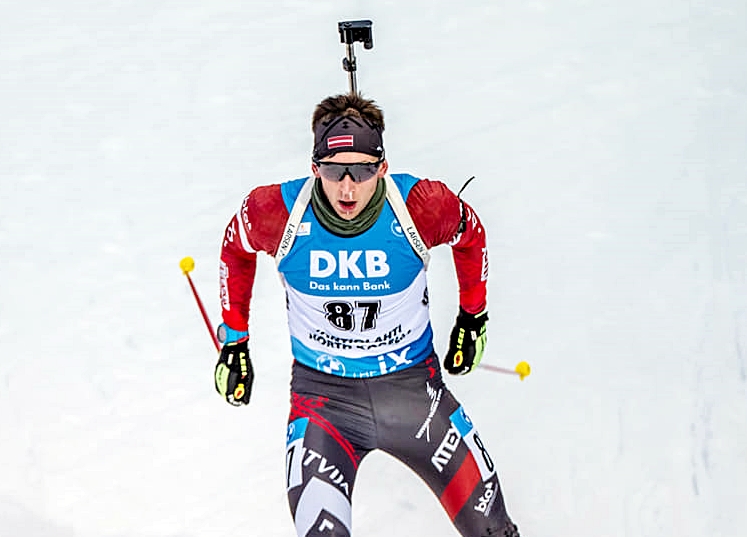 Good luck. Rūdis Balodis achieved his 58th result with the debut of 101 biathletes.

Everything was cooking inside

The competition began with an individual competition for 20 km men, in which R. Balodis made his debut and the debut was successful. The athlete did not score just one goal on four shooting ranges. The step in the distance was not fast enough to fight for a high place, but at the time of his debut, 58th place in the 101 biathlon competition is a good indicator.

The athlete himself, who told “Druvai” about the unexpected arrival at the PK competition, did not hide that it was a surprise: “Three days before the individual start, I did not know that I would start, because at that time we had just returned to Latvia from the first snow camp in Finland. . I was accumulating very quickly and after less than two days at home I was already sitting on the ferry on the way to Finland. “
Rūdis says that the day of the competition went unnoticed because “Covid-19” also presented his changes in biathlon, so there was not much time to think and think about the start: “Seen from the side I was very calm was anxious), but” everything was cooking inside “. Even in the morning, when I had breakfast, my hands were shaking, that’s my feelings before the race. Of course, the lack of viewers has partially eliminated the emotions and anxiety associated with being among the thousands of supporters. As an athlete, I absorb the atmosphere, giving someone more adrenaline to go on the track. The most important thing at that moment – to compete at your own pace, not in a hurry and shoot well. As you know, in order to have a high score, you need not only a fast pace of skiing, but also fast and accurate shooting. I was able to combine these two components, which led to a commendable result.

If someone had told me before that I would show the 58th place in the individual PK start, where the whole biathlon elite starts, I would certainly not believe it. The coach decided that I would have to start at a distance of 20 km, although I do not think that I was physically prepared for such a distance, because a huge amount of work had been done in the camp before, which meant that I was by no means ready for the competition. I went to the start and thought about how it would be, it would be, but in the first round I realized that I was feeling well. I fired the first shooting range “from scratch”, which gave me the confidence to continue. When I reached the finish line, I didn’t even believe I was relatively behind the leaders. That’s probably why he’s so happy now. This beginning will serve as a great motivation for further work and achieving new results. “
After a successful start at 20 km, R. Balodis was given the day off the next day when the sprint competition took place, but it is planned that this week he will start in the second stage of the PK, which will take place in Kontiolahti. Sprint and chase in the competition program.

This is not and will not be a joke

Annija Sabule had the opportunity to start both 15 km individual distance and 7.5 km sprint. Although the positions obtained are at the bottom of the list of results, the experience gained is invaluable. She made three mistakes in the distance of individuals and finished in 94th place, but in the sprint four mistakes and 99th place.

In an interview with “Druva”, he points out that at the beginning there were no plans to start in the World Cup, but the day before leaving the first snow camp, the coach announced that he would have to go to Kontiolahti: “I was surprised and pleasantly excited because I He knew that this season would not be the rest, so decisions must be made quickly and they must be responded to! Of course there was excitement, but such a pleasant excitement from the unknown, because I entered the starting line in the World Cup for the first time! I knew very well that it was not and would not be a joke, so I would not regret the track, I wanted to show the best performance.

If the competition took place on a smaller scale the following years before the PK competition, this time almost all athletes, including A. Sabula, were immediately thrown to the highest level. This is especially troubling as a leap into the unknown, specifically for debutants. Annie admits that she was a little scared because there was no competition, so it is not known what level of sport she will be able to demonstrate at a distance in competition mode, which is completely different from training: “Now that they are both starting behind me, I mean he gave me the assurance that I could shoot and that I had advanced in skiing, which I enjoy the most. Hard hours of exercise slowly come out, which is nice to see when we see how far behind the leaders. Of course, still very far from brilliance, but biathlon is not a one-year job, it’s much, much more, so I’m happy with the opportunity I got and tried to make the most of it! In my opinion, it came according to the circumstances and the situation! The next day the sprint shooting was quite unstable and I didn’t feel confident, but at 15 km I was very focused on shooting because I knew how expensive it was to make mistakes, especially when starting at this level. “

She also says that she really wanted to feel the atmosphere full of competition, when the stadium stands are full of spectators, but the debut was wonderfully beautiful and emotional, motivates him to continue working and go to his goals: “I know that I will be able to experience the noise in silence however, it also has its charm – a habit from Latvian competitions, which in my opinion does not affect my performance in any way. “

He also plans to start in the second phase of PK, but time will tell, because now everything is changing very quickly and drastically.

“I live here and now, I enjoy my emotions and I try to show my work on the track and the shooting range,” says A. Sabule.

Let’s hope we see B. Bendik in the second phase at the beginning, but it depends on Covid-19 analyzes. If they are negative, Baiba will be at the start in the 7.5 km sprint on Thursday.

“I fought cleanly, without a lie. I don’t have to be ashamed of myself. “Conversation with Venus, leaving” Rural Farms ” Shows