November 17, 2018 lebanon, العالم العربي Comments Off on Citizenship is a attachment and attachment to the greater problem of Lebanon 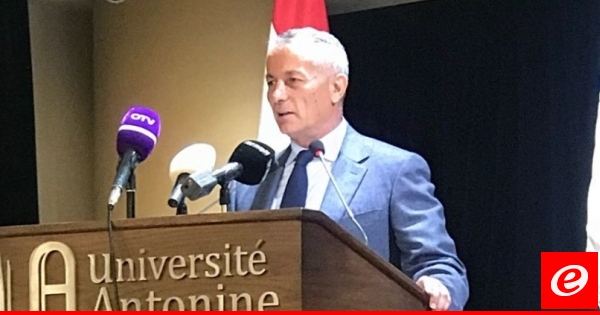 MEP Shamil Roquez said that "citizenship is a way of life, approach, duty, responsibility and self-consciousness that leads to a victim on the path of the country or cause, because today's homeland is lost between political differences, narrow party quotas and trivial disputes."

At a seminar called "Community of Citizens", organized by the Zahle Branch at the University of Antonine, he stressed that "citizenship must stick to and stick to a bigger problem, especially Lebanon, the rule of law, institutions, responsibility and responsibility, clean environment and state jobs for the best young people and the productive economy People, the rule of law and social justice ".

"The martyrdom of Lieutenant Tanios and Lieutenant George Abu Saab was a shock to me, and the events of Abra after the Arsala events came after the martyrdom of Captain Bashalani and Sergeant Zahraman in a very difficult psychological situation for the Army." When I arrived at Saida Al-Qalouq, he decided to finish Ahmed Al-Nasir and it was after 18 hours for the future of Lebanon. For me, the notion of negotiations between the armed forces and the military was a mistake and decided to end up before the next morning. "

He wished to promptly judge the perpetrators to cool the hearts of martyrs' martyrs, including Ahmed al-Asir, Nahra al-Brad and Arsala. The question must be resolved as soon as possible and through my presence in Parliament, from questions to interrogations, and will not be abridged, especially those who have been tortured.