Aziz Akhannouch on a field visit to Berkeley

November 15, 2018 Maroc, morocco Comments Off on Aziz Akhannouch on a field visit to Berkeley 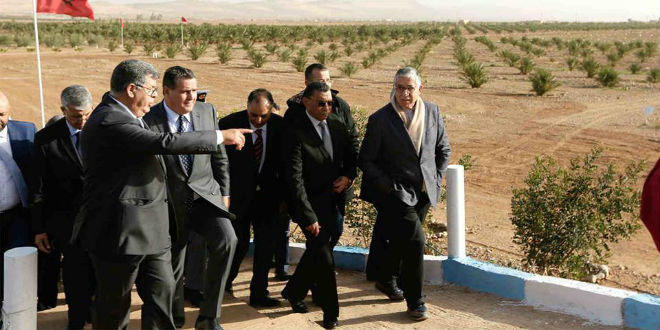 The Minister for Agriculture, Marine Fisheries, Rural Development, Water and Forests, Aziz Akhannouch, had a trip to the province of Berkas on Wednesday 14 November to get acquainted with the state of affairs. progress in some agricultural development programs and projects launched under the Green Balkans (PMV) Plan.

Akhannouch was accompanied during this visit to consolidate the results and accelerate the implementation of ongoing projects, the Governor of the Berkeley province, Mohamed Ali Habouh, the President of the Regional Chamber of Oriental Agriculture, Mimoun Aoussar, and a large delegation of ministries.

In Bouhria, the Minister followed an explanation for the Almond sector development program in the Oriental Region, which includes 57 28,700-hectare projects in 2010-2021 for a total cost of 561 million dirhams (MDH) in favor of 12,350 recipients. The program includes, in addition to almond plantation, the establishment of four regeneration units with a capacity of 31 T / day and the creation and equipment of 32 water points for irrigation. It is expected to reach 35,500 tons of production on an area of ​​51,000 hectares by 2020.

At the same site, Akhannouch began to control the kelp's kelp, an insect that parasitic trees and can cause considerable damage. The reach is about 1200 hectares. The emergency program includes defining the circuits achieved, sensitizing the farmers in the control of the operation, eradicating the infested trees and burning dead wood.

The minister then visited a project to open a rural road in the Tafoughalt district. This 10 km long track, which required a total investment of MDD 8,4, is part of a 200 ha conversion program for olive cereals. At the same time, it took note of the achievements of the rural and rural roadside program for the region of 2015-2018. This program allowed the construction of 80 km of rural roads for investments of 35.9 million dirhams, while in the irrigated perimeter, 62 km of agricultural lines were carried out between 2017 and 2018. An explanation was also provided to Akhannouch for the 2019-2021 program, which mobilizes the forecast of 121 million dirham investments.

The Minister also noted the progress of agricultural projects within the scope of the Regional Office for Agricultural Development in Moulou (ORMVAM) under the Regional Action Plan and planned projects for the remaining period 2018-2020, mainly divided between Pillar II, irrigation and water management programs, and rural and rural roads for total 776 MDH investments by 2020.

At the Department of Berkane Agropole, the Minister visited the newly installed industrial unit, including the new integrated SONACOS seed technology, the new citrus fruit and fruit packing station and the Colaimo unit. & # 39; specializes in the production of cattle feed. With an investment volume of 260 million dirhams, a citrus packing plant is installed on an area of ​​50,000 m2, of which 24,000 m2 are covered. It has a cooling and drip unit and annually processes a capacity of 60,000 tons. This structure will eventually create a direct employment of 450 people.

The Agropole de Berkane development project, launched in 2011 for a total cost of MAD 361 million, covers a total of 102 hectares, of which 6,8 hectares for Qualipole. The project currently being traded aims to increase the productivity of the major sectors of the region and improve the value of agricultural production through agribusiness. It will also provide the region with a considerable part of the added value of the agricultural sector and provide farmers with a single point of contact where all the resources, services and skills will be concentrated.