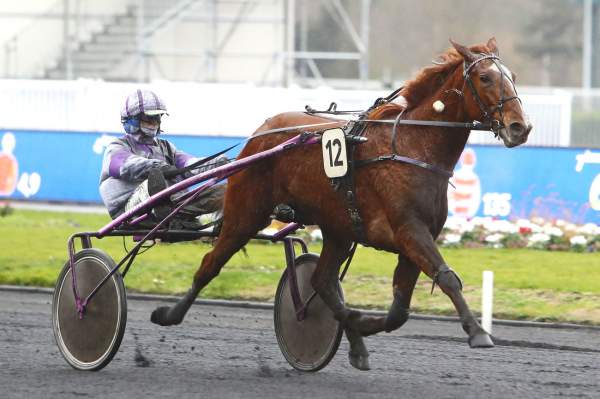 Quinté + Monday in Vincennes with a level D harness race, more than 2100 meters long track starting with autostart, for 7 and 8 year olds who did not win € 200,000. DANAE DE CORBERY (our photos), a course expert, will be very visible.

2 DANAE DE CORBERY : During the winter meeting 2009–2010 she won two fifths, including one on the course we are interested in. His form is safe, as evidenced by his October performance. Good base

4 GOLD BEAUTIFUL : Even last winter in Vincennes he did well before he was spared in 2020. His second place on November 20 at 2850 meters of small track is encouraging. It must also be remembered as a priority.

7 SUNDAY D’ELA : In his last eleven trips, he finished in the top five with six wins. Third for Dorado Bello on November 20, his luck in this event is evident.

11 DE LA CHENEVIERE : The third of the fifth on October 23 won the race on November 27 in race D on 285 meters of small track. In great condition, it deserves recognition despite the position in the second row behind the automatic start.

12 CESAR MADJI : Third in Race D on this track on October 13, he finished fourth on November 20 near Dorado Bello and Domingo d’Ela. At the end of a favorable racetrack he can get a good classification.

9 GEDE CONCERT : His second place on October 13, where he was before the aforementioned César Madji, gives him a regular chance in this fifth. For the place.

8 DIPLOMATE D’AM ONE : In his last nine expeditions, he finished eight times in the top four and won three times. He is a contestant for a good allocation in this case.

14 DIVINE GIRL : In race D on November 20, often considered a reference for this fifth, she took an encouraging fifth place after a nice end to the race. Despite his number 14 in the second row, he is not out of the game for a small place.

In case of not running : 5 CONCRETE CAGNARD

A moment of madness
14 – DIVINE GIRL

In three running fifths SUNDAY D’ELA signed two victories and 3rd place. Statistics at his disposal, at the Prix des Alpes, an event at the beginning of the week, in Vincennes.