Samsung W2019: The new high-end foldable phone provides a view of the S10

November 10, 2018 switzerland, Wissen & Technik Comments Off on Samsung W2019: The new high-end foldable phone provides a view of the S10

It's Time Again: The Samsung Xinxitianxia W2019 (also known as the "Heart of the World" or "Heavenly Wisdom") once again introduced a smartphone in the classical format of a phone equipped with state-of-the-art technology. The device is an absolute luxury phone, worth the equivalent of more than 2400 euros.


The Samsung W2019 offers state-of-the-art S9-based technology that has been available since the beginning of the year, but as in previous years, it is likely to provide a preview of a range of top-of-the-line Galaxy S smartphones next year. That's why we can see the configuration here, at least for the camera, which will eventually appear on the Samsung Galaxy S10. 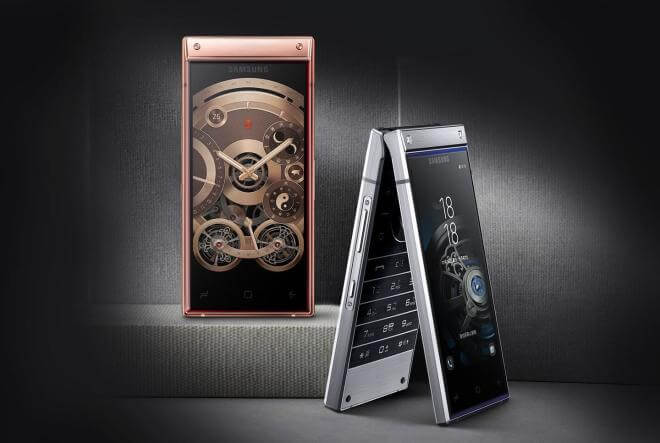 W2019: Samsung has re-released its crazy luxurious folding phone
Like the last model of the Samsung W2018, the new W2019 also has two 4.2-inch displays, each mounted on the outside and inside the lid of the hinged cover. Both are very high resolution with a resolution of 1920×1080 pixels and each of them uses Samsung's own SuperAMOLED screens. Unlike most other current Samsung devices, there are still classic Android buttons in the form of capacitive buttons below the outside screen.

Inside, the operation takes place either via the touchscreen or via the hardware keyboard, making it much easier to enter Chinese characters on touch devices. In addition to the buttons for "Back", "Multitasking", "Home" and "Copy", which are executed as hardware buttons, there is also a multifunctional D-pad with the next button in the middle.

The W2019 is based on the current Qualcomm Snapdragon 845 Octacore SoC, a top-of-the-line SoC, which can be found in many other smartphones in 2018, up to 2.8 gigabytes. It is built with six gigabytes of memory and 128 or 256 GB of internal flash memory, which is based on UFS 2.1 and can be extended by a microSD slot.

A glimpse of the future with the Galaxy S10 series is likely to offer the rear camera model of the W2019. Two 12 megapixel readers are available, one with a variable aperture (F / 1.5 – F / 2.4). It is now called "Smart Iris" and probably should be able to select the correct aperture size automatically using Artificial Intelligence features. Obviously, it was not possible to clarify it because of the lack of knowledge of the Chinese.

What is certain is that the Samsung W2019 dual camera offers dual optical zoom and can record 4K videos up to 60 frames per second. Also here is the optical image stabilizer implemented in the hardware. Other features include Bluetooth 4.2, dual-band Gigabit Wi-Fi, NFC and USB-C port. The fingerprint reader is sitting on the side of the case, but Samsung is supplying the headphone jack as in the previous year.

Speaking of USB-C: The USB 3.1 Gen1 is of course also used for charging, offering a 3070mAh battery capacity. All the great technologies around the two displays and the big battery together with the metal frame ensure a very high weight of a huge 257 grams. When composing, W2019 is rough with a thickness of 17.3 millimeters.

The operating system is still Android 8.1 "Oreo" in operation, Samsung uses a highly customized design. Interestingly, the luxury Klapphandy is sold along with a special subscription service that provides on-demand owners with good tilt, car with a driver or other auxiliary tasks. Samsung W2019 costs 18,999 yuan in China, equivalent to 2410 euros or 2730 US dollars.