December 6, 2020 uae Comments Off on According to Hamdan bin Zayed’s guidelines, the Italian embassy will start providing a crescent to those affected by the weather. 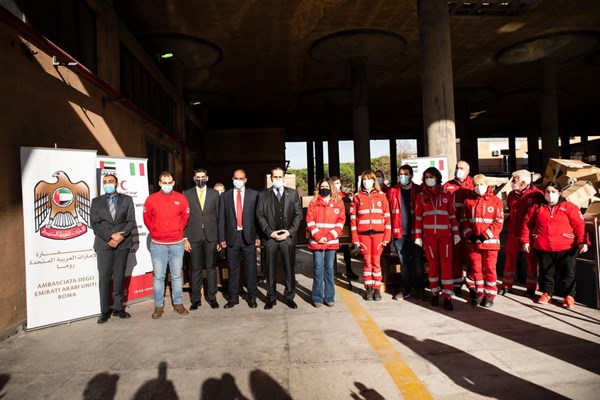 Following the instructions of His Majesty Sheikh Hamdan bin Zayed Al Nahyan, Deputy Ruler of the Al Dhafra Region and President of the Emirate of the Red Crescent, the country’s embassy in Rome has begun providing winter assistance to needy families and vulnerable groups in Italy and the Republics of San Mario and Macedonia. benefit 15,000 people in three countries. .
This is part of the Emirates Red Crescent Authority’s winter assistance program for people affected by the effects of cold and winter in 25 countries around the world.
This assistance was coordinated between the country’s embassy in Rome, the Emirates Red Crescent Office, the Italian Red Cross Society, civil defense agencies, official bodies and non-profit associations. The embassy, ​​in collaboration with these local authorities, has developed a distribution plan that would cover all target areas so that this assistance reaches the most needy families and includes all segments of the community structure in these countries.
His Excellency Dr. Mohamed Ateeq Al Falahi, Secretary General of the Office of the Emirates for the Red Crescent, confirmed that the winter aid program, implemented under the leadership of His Majesty Sheikh Hamdan bin Zayed Al Nahyan, aims to meet the needs of those affected by the winter and improve their capacity. to cope with the effects of low temperatures and weather fluctuations. And bad weather conditions in winter. He said that His Highness paid great attention to the conditions of these groups and was interested in providing their basic requirements during all seasons. For the winter.
Al-Falahi added that the Office has stepped up its winter aid this year due to the health conditions currently facing the world due to the Corona pandemic, so it is essential to ensure adequate conditions for the aid program and strengthen means to prevent and protect against influenza and winter diseases, so that they are not vulnerable to a pandemic.
He praised the spirit of cooperation between the Office and the country’s embassies abroad, strengthening emirate aid to brotherly and friendly people, praising the role of the state embassy in Rome in expanding umbrella winter aid recipients in Italy, North Macedonia and San Marino, and strengthening UAE Red Crescent humanitarian and development initiatives in these areas. countries.
Omar Obaid Muhammad Al Hussan Al Shamsi, the country’s ambassador to the Italian Republic, non-resident ambassador to the Republic of San Marino and the Republic of Macedonia, praised Sheikh Hamdan bin Zayed Al Nahyan’s generous initiative, which reflects feelings of brotherhood and solidarity between leadership and people in the UAE. Earth … suggesting that this is due to the approach and idea of ​​the founder, Sheikh Zayed bin Sultan Al Nahyan, may God bless him and give him the peace that the UAE has followed to this day.
He added that the embassy will strive to implement and monitor His Highness’s guidelines in order to meet the needs of vulnerable families, especially those affected by the economic consequences of the Coronian pandemic during the winter season.
He said the Red Crescent Office has stepped up its winter aid this year because of the health conditions the world is currently facing due to the Corona pandemic, and the gift is an extension of previous aid to these countries by the state and mother of the Emirates, Her Majesty Sheikh Fatima bint Mubarak , President of the General Women’s Union, President of the Supreme Council for Motherhood and Childhood, Supreme Chairman of the Foundation for Family Development, Honorary Chairman of the Office for the Emirates of the Red Crescent.
The Ambassador indicated that these initiatives had resulted in great solidarity between the emirates and the peoples of the world, through letters of gratitude and gratitude to the country’s embassies in Rome, and from key officials and politicians in those countries and mayors, as well as Even from ordinary citizens who have touched near the UAE and their wise leadership are simple people and their direct concerns and coverage of their needs.