Mohammed bin Rashid: We want the government agencies to provide the best … We do not accept any hesitations or delays or excuses

November 20, 2018 uae, العالم العربي Comments Off on Mohammed bin Rashid: We want the government agencies to provide the best … We do not accept any hesitations or delays or excuses 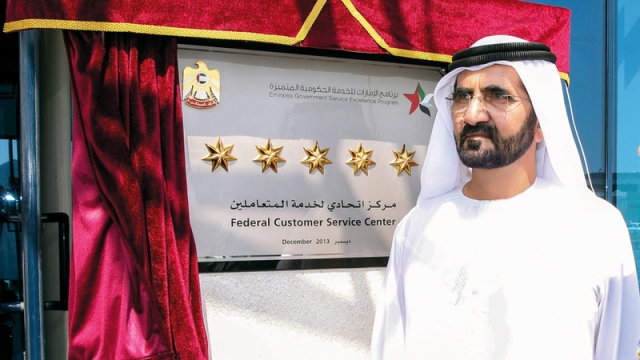 Deputy Prime Minister and Prime Minister of Dubai, President Sheikh Mohammed bin Rashid Al Maktoum, said: "The provision of the best government services in the world is the standard and goal of any government in the United Arab Emirates."

"We want government agencies to provide the best services in the world," he said. "That's what we are trying to do, we do not accept any hesitation, delay or excuses." He prevented it from reaching it.

"Six years ago, we launched a Global Star Rating System that evaluates each area according to the level of service it provides, reflecting our business approach by providing unprecedented experience with services that will delight people, improve their quality of life and serve as a model , which inspires the world's governments ". His Majesty Shaykh Mohammed bin Rashid Al Maktoum said: "The SAE offers ideas for achieving human happiness, enhancing the quality of community life and translating them on the ground, and the success of government agencies to happily reflect the realistic picture of what is required of them. an image of our employees and clients that our government is working to meet the expectations of the community and deliver services beyond expectations. "

"We want all parties to speed up the pace of work and step up efforts to achieve better results at upcoming meetings, which supports our efforts to implement our national agenda and improves our progress towards the future we are trying to do," he said. To him ". In the third cycle of the STARS system, the share of four-star centers increased from 35% to 74% and the percentage of three-star resorts decreased from 66% to 23% compared to the previous cycle in 2015. The percentage of centers ranked five of the total number of centers rated 4.2% .

The results of the third session of the STARS system reflected improvements in the efficiency of government agencies and their staff and a significant improvement in the quality and quality of customer service, revealing a qualitative change in party levels and opportunities to improve the performance of merchant centers and improve service levels.

The United Arab Emirates is the first country in the world to adopt a global star rating system launched by its chief executive Sheikh Mohammed bin Rashid Al Maktoum, the Vice President and Prime Minister of the United Arab Emirates and the ruler of Dubai, to redefine an innovative concept and an integrated framework for government services . Efficiency according to the best international standards.

"We want all parties to speed up the pace of work, which strengthens our march towards the future we are trying to do."

Results of the third section of the Global Star Rating System

Including 167 rating centers for vendors in 20 federal entities:

* Percentage of centers with four stars up to about 74%.

* The percentage of 3-star centers has fallen to around 23%.