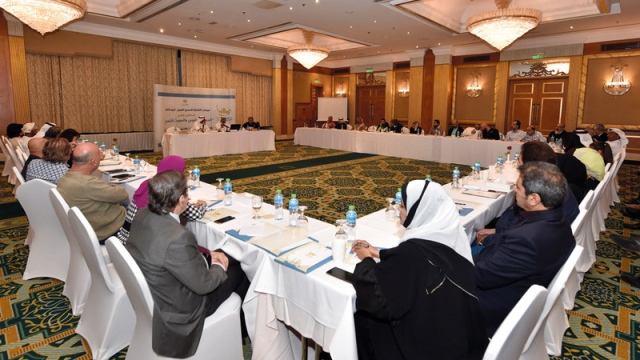 He participated in the intellectual forum accompanying the Sharjah Festival of the Gulf Theater, reassessed his current experience, and linked it to his favorite heritage while maintaining open-mindedness for and benefiting from global experiences.

The forum is held this year under the slogan "Gulf Theater and Folklore". Bahrain student Abdullah Yousif, who presented the Gulf Theater and Folk Performing Arts at the forum, has been contemplating and evaluating projects that have deprived the folk heritage of the Gulf Theater. He called for the realization of visions and visions in heritage, "chooses what feeds and fulfills the imagination of the Creator, Cameraman and Recipient Box) with a tremendous amount of success in life in the Gulf, its four historical components and its social structure: maritime, desert, civic. "

Yusuf returned to the Gulf Theater's historic march and the relationship to the origin and development of the people's heritage and to the effectiveness of what he inherited in the early stages of the phenomenon.

He believed that, despite the simple beginnings of the Gulf Theater movement, pioneers were fully aware of the importance of theater and its role in society, motivating them to use society's phenomena and their heritage, and easily and in their theatrical successes, the heart of his life, civilization and heritage, and open world scenic practices at the time.

"The achievement of the pioneers and the establishment of the Gulf theater movement in all its dimensions did not last long and did not escalate. The last period in which we witness today its manifestations and results has led to the separation of theatrical practice from the inheritance which has led to a decline in the movement of the game in general and the retreat and the loss to the public, an audience that has become and supported in its beginnings when it saw itself and its inheritance and authenticity. "

Saudi author Sami Al-Jamaan himself is dedicated to "adapting folk singing to serve drama," and justified his focus on popular singing with an urgent need to study ways to use the song in the theater. The popular composition can play two important roles in the game, the first is a dramatic role, each song is associated with dramatic circumstances of sadness, joy, meditation, Dramatically can be used to deepen, develop or transform the event. The second part of the song is a performance, since the song is the first of the rhythmic and dynamic performances, which means they are active on stage when used correctly, which is in line with the psychological atmosphere and the sense of the scene in which it is used. Al-Jamaan has been exploring a variety of Gulf wilderness experiences, which has hired a conscious conscience to make use of these dramatic and powerful dimensions, and has used its energy in both directions and addressed artworks, particularly in the United Arab Emirates and Kuwait.

On the edge of the Sharjah Gulf Theater Festival, a training workshop called "Basics of Makeup" under the guidance of Bahrainian artist Yasser Saif was held in the presence of a number of theater and people interested in this element. Ancient Egyptian pharaoh used kohl and henna in cosmetics and decorations, followed by Greeks and Romans, as well as Africans who used oil and oils to polish their skin and makeup knowledge, let's say using a mask and replace them.

Saif stressed that this element, which may seem simple and marginal, is in fact one of the most important elements of beauty, facial features, the last portals of the actor's arrival to a personality who must enter a so-called "inner makeup" that has nothing in common and the colors used by Macier, but relates to the internal situation experienced by the actor from within, characterizing the expressions on his face and body and then supplemented by Macier by putting on the face of an actor ready for the work of Macier who not only stopped his face but extended his work to the other parts The body, it is not wise to see a new hand Yeh with the face of an old person, or a white neck-to-face brown or vice versa. He explained that the make-up work begins because all the elements of the game start with the text. The maker has to read the text well to improve the performance of his role in the show and he has received awards and opinions and not just a tool that would benefit from the director's point of view. He stressed that Mackerer had participated in theater performance training and met with staff since the beginning of the director.