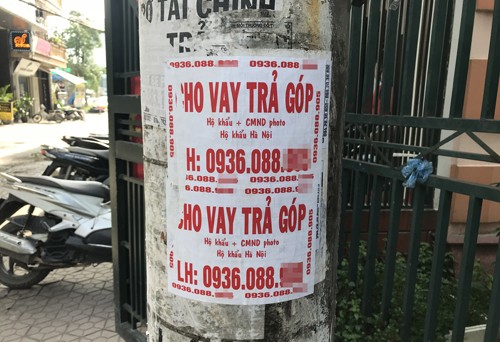 On a lot of walls, a mast or any room on the walls in Hanoi there is a brochure on "Alo's Money", "Low Interest Loans", "Financial Support for Disadvantaged People", "Non-Billing Loan" … with a contact number.

In Thanh Xuan District (Hanoi) near the University of Architecture, the Academy of Security, the Academy of Post and Telecommunications has more than 20 money lending deals. Lang Street (Dong Da District) is about 4 km long, but it focuses on over 50 shops.

In mid-October 1818 Phong phoned the telephone number on the label, a man who confirmed that the "low-interest loan" had a simple procedure. There is not much to call, Phong told the Financial Office at Lang Road to exchange it.

In the shop there is a billboard outside the beautiful sale of SIM cards, Phong is led by glass doors and enters the "office for loans". Here he found that five people were written in hui paper, fingerprints, and counting money. All transactions take place quickly.

The creditor says that the client needs only the identity card, the household registration book, and the employment contract without security. After the initial agreement, the salon will send the person to his place of residence and workplace for verification. "Only about an hour's money," he said. 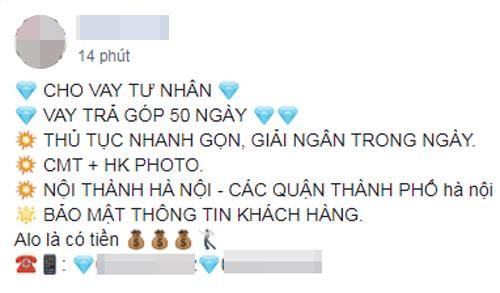 According to traders, there are loans in the form of installments, which are also known as flushing. The borrowers will be paid daily with advance payments and principal repayments.

If it goes to 10 million, customers can hold about 8 million and pay 200,000 VND per day within 50 days. This means that the borrower will be deducted 20% of the loan amount. "Anyone who has a home registration book in Hanoi can get a 30 million dollar loan, not just get 10-20 million dongs and work," explains the lawyer.

Every day the borrower will have to go to the store to pay or pay the transfer. In case of force majeure, the lender will send people to collect money.

Customers have to accept interest rates almost 15% per month, which is almost 180% per year. Meanwhile, credit institutions now lend 10-14% a year.

They need the money to teach, after a long time, Mr. Tai called a telephone number on a Dich Vong pole (Cau Giay, Hanoi). borrowed 10 million. Approximately 30 minutes after contact with two young men on a motorcycle on the Tai. When they saw all the documents, they only agreed to borrow 4 billion GNIs in the interest of VND5,000 per million in one day.

"If you want to borrow 10 million, then take two merchants (holding a student card, ID card) to the store and confirm it. To borrow more, it is mandatory to have a book on registering a household in Hanoi," the young man said.

To the financial network headquarters in Mai Dich Ward (Cau Giay District), Mr. Tai is a man over 40, he must be responsible for interests and interests. "The procedure is fairly simple, but I have all the information, so do not think you're running away. Many people tried to escape the debt but failed," he stiffened.

If he agrees to borrow 4 million VNDs in one month, he must pay the loan and pay 600,000 GNIs in the interest. In the debt notification, only the amount, the time of the loan, and no interest rate. Borrowers then have to talk about interest rates and it forces the store owner to make the video as evidence.

"Black credit as a daily robbery"

According to the staff of the Criminal Police Department (Hanoi Police), many cases have been destroyed and many have been arrested, but people are still falling into the black trap. Organization of "financial assistance" often masks the behavior of usury in various forms to deal with the authorities. Debtors who are unable to pay their debts will be exposed to black gangs, threats, intentional wounds.

The police are fighting hundreds of unnecessary sharks and loans. According to the Ministry of Public Security, the economic situation is causing the problem, many individuals, businesses with capital difficulties should borrow. Some young people who do not work, as well as gambling. The treatment of sanctions is inadequate; government inadequacy …

Death can go to jail

Lawyer Vu Tien Vinh (Bao Law Office) stated that Article 201 of the Criminal Code 2015 provides that in civilian businesses those who borrow at the rate of interest five times higher than the highest rate set by the Civil Law (currently 20% / year) illicit profits from 30 to less than 100 million … will be punished from 50 to 200 million or non-resurrectional reforms for up to three years.

In cases where lending of heavy interests is not sufficiently serious to allow criminal liability to be investigated, the fine may be imposed in accordance with the provisions of Article 11 of Decree No 167/2013 / ND-CP with a fine of between 5 and 15 million GNI.